There’s much more to mountains than their peaks. They are wide, like bodies whose center of energy may be more in the main mass of the body than at the top.  Therefore it makes sense that a band, like a bridge spanning these places, would be a wide one.

New information is that this line also extends south to Mount Lassen, going straight through the peak of Mount Shasta and reaching to 1 mile east of the peak on Mount Lassen, also 8 miles wide above 7,000 ft.

Some folks think the line reaches 500 miles south of Mount Lassen, down to Mount Baldy east of L.A.  I checked this out, and I can see what they mean.   Starting from the peak of Mount Shasta, if an Osprey happened to fly in a straight line 550 miles south directly to the peak of Mount Baldy, it would fly 1.8 miles west of Mount Lassen, still within the main body of the mountain above 8,600 ft.

Mount Baldy, at 10,000 feet the biggest mountain in the San Gabriels, is in Tongva traditional territory, and was certainly regarded as sacred, like the other mountains in the line to the north.  Mount Baldy is also the location of World Peace Ceremonies in 2018 and 2019 that have been put on for 11 years by the Aetherius Society.  In 2018 and 2019, I organized people from Ti’loimikh, Mount Ashland and Mount Shasta to join in prayer ceremonies with them on Mount Baldy.  We had no idea there was a straight line connection between all these special places, and the ceremonies were powerful anyway.  Knowing this deep Earthly connection between 5 sacred sites reaching over 600 miles, we are inspired to devote ourselves fully to learn more about how we can honor and use this gift in the best way for all beings. 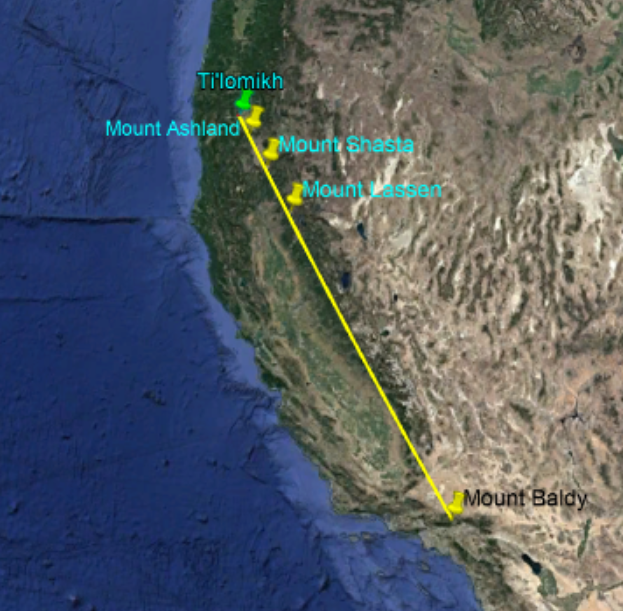