I learned about this from Rockman (Jim Carpenter), who must have learned about if from Lorae Ireland.  She is the source of information about the ley line that runs from the Oregon Vortex through Mount Ashland, Mount Shasta, and Mount Lassen, and all the way down to Mount Baldy by Los Angeles.  My contribution was to notice that the ancient ceremony site at Ti’lomikh Falls was directly on this ley line.

This was referred to me by Steven ReMe, then verified with google earth.

I have since learned from Diana Burke that there was a discussion group in Grants Pass, Oregon where this ley line, and others, were discussed.

Sometime I hope to be able to provide more information about Lorae Ireland.

Map of Lorae Ireland’s “Return Focus Triangle”, provided by Steven ReMe, who placed the heart showing the location of Ti’lomikh Falls on it.  To me, this name seems prophetic of the re-discovery of its greater significance.  At the time Lorae Ireland wrote, no one but Grandmother Agnes Baker Pilgrim and Thomas Doty knew of the ancient Salmon Ceremony site at Ti’lomikh Falls. 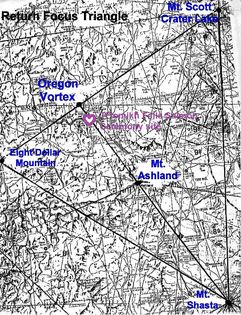