The goal is to show how the powers of Mount Lassen, Mount Shasta and Mount Ashland were used to create, with the line of their connection, a major power center for the Salmon and the Indigenous people along the Rogue River – Ti’lomikh Falls – the best Salmon fishing spot on the river and therefore the focus of the origin story of the Takelma people and the Sacred Salmon Ceremony.

I imagine the painting as shown in the diagram below.  The viewer is high in the sky, looking down at an Osprey flying to the left between Mount Shasta (bottom right) and Mount Ashland (middle), headed directly to Ti’lomikh (top left).  On April 20, 2017, this is what we saw.  An Osprey flew right over our heads at Blessing Mount Ashland, coming from the direction of Mount Shasta and headed straight for the Rogue River. 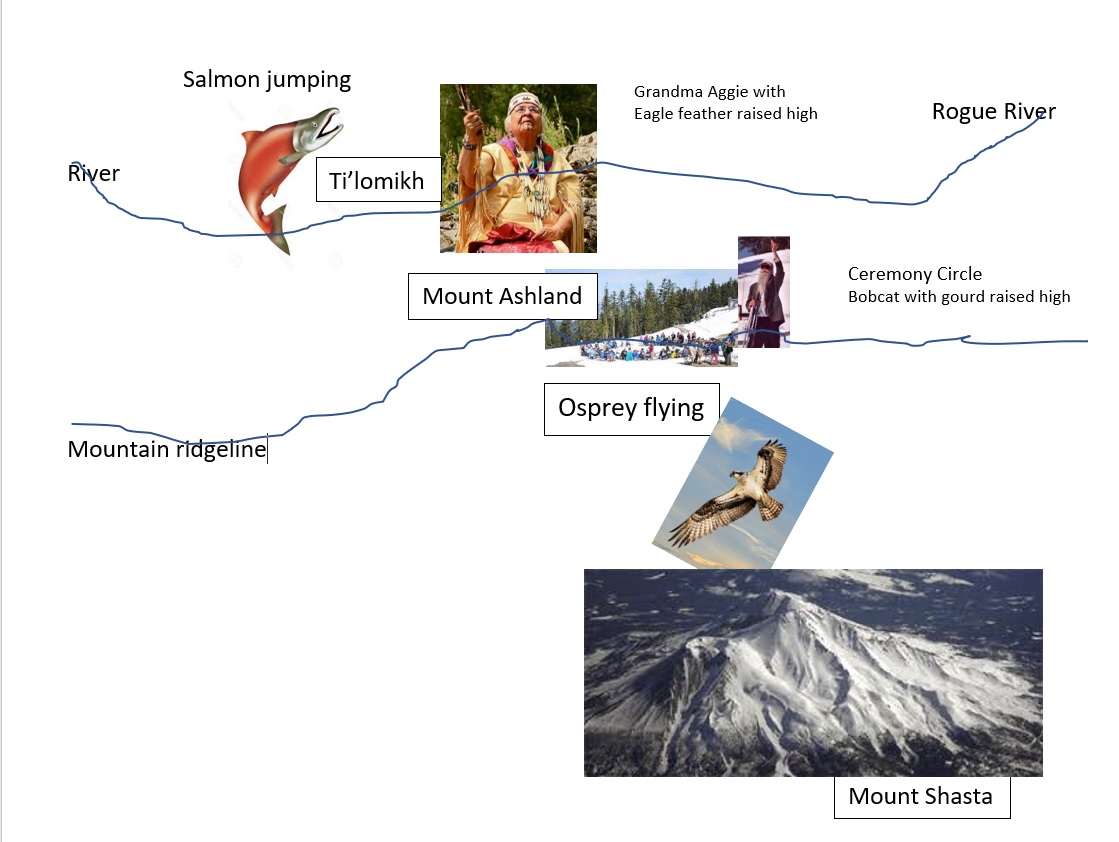 There will be a few important figures within the larger landscape overview:

— at Mount Ashland, a strong circle of people, perhaps with me holding my shaker gourd high up in prayer.

— at Ti’lomikh, Grandma Aggie by the river holding up her Eagle feather in prayer (as shown in Rory Finney’s awesome photo).

. . . and next to her, a Salmon leaping out of the water, just as one did when the sweat lodge leader lit the pipe with the divers right after they came out of the river in 2007, following the first ceremony honoring Salmon in 150 years.

I think the best place to put this painting is the Ski Lodge at Mount Ashland, where people standing on the line between Mount Shasta and Ti’lomikh could themselves have a chance to feel the power of the connection the Osprey showed us.  The Manager of the Ski Area, Hiram Towle, remembers the Osprey well, and supports the project.

Another use of a painting will be as a digital image, circulated from its home at blessingmountainsinthesnow.org

It would be great to do a press release and have a gallery showing of this major work commemorating a Southern Oregon icon with a painting showing the power of the place that she brought the Salmon Ceremony back to after 150 years.