NATURE SPIRITS ARE AS *REAL* AS THE OSPREYS THEY SEND TO US.
and they won’t let us forget it — the 4th and 5th flyovers just happened!

An Osprey flew over me, low and close enough to see the details of the feathers in the necklace that females wear. 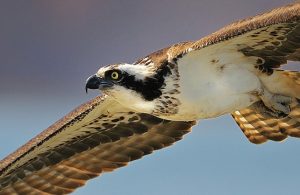 I was talking on the phone to Windsong about The Osprey’s Path, and how real all this is — with spirit connections continuing — and then my second Osprey flyover happened, a whole lot lower this time than when it flew over us on Mount Ashland in 2017.

Out my north window I could see a large bird gliding straight towards me at eye level, wings stretched wide. Before it lifted up to barely clear my roof, I could see that it was an Osprey — flying so low that I could easily see the necklace of dark feathers that females wear.

This was the first time I had seen an Osprey here. No one had ever seen one here until my recent lucky 77th birthday, when my land partner Nate was at the river with his son Isaac and an Osprey circled over them — on the same day, an Osprey circled Joy Love at Ti’lomikh. Neither Nate nor Joy were aware it was my birthday. It seems that the Spirits know our birthdays better than we do. Two Golden Eagles flew right over Nate’s house on his 40th birthday.

Once I was asked an Indian friend about how I should follow through with the Osprey. “Well, how about talking to it?”, she said. “Whoa”, I thought, “how am I ever going to find one?” So the Spirits heard, and sent an Osprey to me! And, of course being very efficient, they waited for the optimum time — with Windsong right there on the phone with me, talking about The Osprey’s Path and our ongoing contact with our Spirit Messengers. So it’s clear that the role Windsong has to play in all this was specifically recognized by the Osprey. She remembers well the day one flew over the beginning of the ceremony on Mount Ashland, just like you do.

Around the same time that this encounter happened at home, Joy Love was in a kayak at a river on the coast and saw an Osprey standing in the water at the side of the river about 25 ft away. Never shy, Joy paddled half way to it, and looked into the Osprey’s eyes for a long time. Then the Osprey turned to one side, so Joy closed her eyes in meditation and openness. Later, she felt a shift, noticed that the Osprey had turned the other direction, sensed that it was time for her to go, and began to paddle backwards. The Osprey then took off, circled over her once, and flew away.

There is a reason that birds and other animals are reaching out to us so much more these days. The Earth and humans are in big trouble. Those of us who are active in supporting each other need more inspiration, more confidence that what we do matters.

And with The Osprey’s Path, there is something more. We have been shown an alignment that I believe we are supposed to use as a tool, as a means of healing and empowering us to do our work for People & Earth better and clearer.

When we stand at the ski area the top of Mount Ashland, we are in a unique position to be supported directly by the Path, whether you feel it consciously or not. Try facing Mount Shasta and feeling the Rogue River at your back. Then turn the other way and feel Mount Shasta. And then face the peak of Mount Ashland, and with your arms outstretched to left and right, feel the energy of the Path enveloping you, and flowing.

I only tell this story to people who I know are already aware of such possibilities. And even then, here’s what I say:

Hey, I have a story for you, the likes of which you’ve never heard. 3 major mountains in a straight line 160 miles long, leading right to a Native American sacred site. Go figure. It’s crazy, but it’s true!  😀